Josef Weinbub is an Assistant Professor (tenure-track) of High Performance Simulation in Micro- and Nanoelectronics, an IEEE Senior Member, and a Member of the IEEE Nanotechnology Council’s Modeling and Simulation Technical Committee. He obtained the doctoral degree in Computational Microelectronics and the venia docendi (habilitation) in the field of Micro- and Nanoelectronics from the TU Wien. He was a visiting researcher at the EPCC, University of Edinburgh and at the Device Modelling Group, University of Glasgow, Scotland, UK as well as at SILVACO Inc., Santa Clara, CA, USA. He founded and now chairs the master’s program Computational Science and Engineering at the TU Wien and is involved with several international scientific conferences in various management and scientific roles. He is an Associate Editor of the Journal of Computational Electronics and a Principal Investigator of various research projects funded by, e.g., the Austrian Science Fund and the Christian Doppler Research Association. Together with his team he investigates cutting-edge research problems in the area of computational micro- and nanoelectronics. 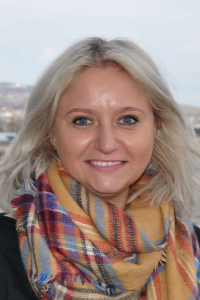 Diana Pop was born in Brasov, Romania. She received the bachelor’s degree in applied physics from Transylvania University of Brasov Romania, the master’s degree in remote engineering and the master of arts following the IBM study at FH Kärnten, Austria, in 2009, 2011 and 2016 respectively. From 2009 to 2011 Diana was with IEEE Women in Engineering and in 2009 she was a visiting research engineer at Massachusetts Institute of Technology, USA. Diana is currently employed as administrative manager at the Institute for Microelectronics, where she is in charge of the European and national funded projects and part of the administration of the institute. She joined the HPTCAD team in February 2018 and offers support for financial and organizational topics.

Petra Kamptner-Jonas was born in Vienna, Austria. She has over 30 years of experience in the private sector of which almost 20 years she served as managing director. Petra is currently employed as project administrator at the Institute for Microelectronics. She joined the HPTCAD teams in April 2021 and is supporting the team members with administrative tasks.

Paul Manstetten was born in 1984 in Berlin, Germany. He studied Mechatronics at the University of Applied Sciences Regensburg (Dipl.-Ing.) and Computational Engineering at the University of Erlangen-Nuremberg (MSc). After three years as an application engineer for optical simulations at OSRAM Opto Semiconductors in Regensburg he joined the Institute for Microelectronics in 2015 as a project assistant. He finished his PhD studies (Dr.techn.) in 2018 and works as a postdoctoral researcher on high performance methods for semiconductor process simulation.

Luiz Felipe Aguinsky was born in Porto Alegre/RS, Brazil in 1990. He holds a Bachelor’s degree in Physics from the Federal University of Rio Grande do Sul, Brazil and a Master’s degree in Simulation Sciences from the RWTH Aachen, Germany. He joined the Institute for Microelectronics in March 2018 as a research assistant. He is researching high performance numerical approaches for Technology CAD within the scope of the Christian Doppler Laboratory for High Performance TCAD.

Christoph Lenz was born in 1988 in Vienna, Austria. He studied Technical Mathematics at the Technische Universität Wien where he received his Bachelor’s degree (2017) and the degree of Diplomingenieur (2019). After finishing his thesis which was written in collaboration with the Institute for Microelectronics, TU Wien, he decided to join the research team of the institute, where he is currently working on his doctoral degree. His research interests include high performance algorithms and data structures and he is working within the scope of the Christian Doppler Laboratory for High Performance TCAD.

Michael Quell was born in 1993 in Vienna, Austria. He received his Bachelor’s and Master’s degree in Technical Mathematics from the Technische Universität Wien (Vienna University of Technology) (BSc, 2016; MSc, 2018). After finishing his studies he joined the Institute for Microelectronics in June 2018. He is researching high performance data structures within the scope of the Christian Doppler Laboratory for High Performance TCAD.

Frâncio Souza Berti Rodrigues was born in 1991 in Caxias do Sul, Brazil. He received his Bachelor’s degree in Engineering Physics from the Federal University of Rio Grande do Sul (BSc, 2015). Subsequently, he received his Master’s Degree in Microelectronics Manufacturing from the same university (MSc, 2018). After finishing his studies, he worked in research and development for the packaging industry before joining the Institute for Microelectronics in September 2019. He is currently pursuing his doctoral degree, researching high performance numerical approaches for Technology CAD within the scope of the Christian Doppler Laboratory for High Performance TCAD.